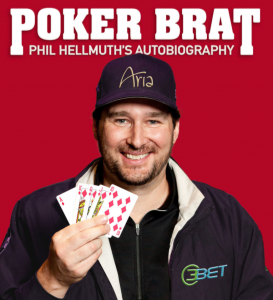 Phil had just sneaked away from the podium to give a signed copy of his about-to-be published autobiography, POKER BRAT, to the 64-year-old poker-playing novice, John Hesp, from England, who had taken the poker world by storm with his fourth-placed finish for $2.6million.

The tall, majestic, Californian with his trademark peaked baseball cap and headphones, took time out to give me some quotes on the “breath of fresh air” that was the recreational player from Hull whose previous biggest win had been £750 at his local casino.
Phil and I exchanged pleasantries – but we were not done. And the next day he invited me for lunch at his luxurious VIP suite at the amazing Aria Hotel and Casino. 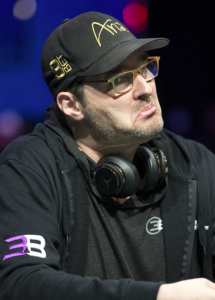 We chatted about his new book, which he had high hopes of hitting the New York Times bestseller list, and another that he was writing, entitled #POSITIVITY, for publication early next year.
It was a rest day in the Main Event as the Final Table prepared to resume battle for the $8million first prize.

But although Phil needed to “save” his voice, for his commentary duties, he still had a busy schedu to keep. ‘I’m just off to play a $2-$5 cash game at the Rio with some famous YouTube players, who will send out our hands. Fancy coming along?’ he asked.

My reply: “Deal me in.” The outcome of the game is a closely-guarded secret but I survived the encounter without any hairdryer moment from the Poker Brat of Texas Hold ‘Em.
In fact, as he drove me back to the Aria – opening the secret gates to the exclusive area of the
hotel with the flick of a switch in his car – we arranged another get-together the following day.
Phil is a legend among poker players around the globe. The winner of 14 WSOP Gold Bracelets –
more than any other player in the history of the game – and over $21million in tournament winnin He is used to raising, raising and raising again, forcing opponents to either fold the winning hand

or call him when he has the nuts.

But now Phil is raising even more – this time in a bid to hit his target of pulling-in $100million for charity . And he is proud to say philhellmuth.com has him currently having raised £46million.
It is a desire he talks about with passion and commitment – a far cry from the super brat of the
table whose tantrums earned him his nickname and which have been viewed millions of times

on social media.
But Phil is also a man of great humour and integrity, a family man who holds old-fashioned traditional values close to his heart. PhilinvitedmetothelaunchforhisautobiographyataprivaterestaurantinSiliconValley, California. It was a private and intimate reception with Phil holding court among his best-loved family and friends including billionaire businessman and entrepreneur Elon Musk.

We chatted about his life of poker and beyond.
One thing is for sure….he is not the brat you think he is!

PHIL Hellmuth had just clinched the World Series of Europe Main Event title in Cannes picking up more than one million euros in prizemoneyandhis13thcovetedgold bracelet.

It was September, 2012, and he left the swish resort in the south of France on cloud nine
But after five intense days of Texas Hold ‘Em poker against the world’s best players he was exhausted.

He was crowned champion at 3.45am after seeingoffhisheads-upadversarySergii
Baranov who had earlier confided in Phil that hepredictedthetwomastersofthegame would finish first and second.

But there were celebrations to be held before the then 48-year-old American headed back
to his homeland.

Phil recalls: “I was overwhelmed. It was the
best poker tournament that I had ever played in my life. However, just because I had played the best tournament of my life, it certainly
didn’t mean I would win the title.

“This is poker! In golf, if Tiger Woods plays his best, then he wins by double digits. But in poker, you can get unlucky, or lose every flip. After I won, I was interviewed on global television,andIsaid:’Iknowyou’renot expecting to hear this, but I’m humbled I’m thankful. I appreciate this one so much.’

“Yes, I played one of the best tournaments of my life, but I’ve been around, and the fact that I won is a blessing.”

“Then we went out to drink Dom Perignon –
on the casino – across the street for a couple of hours. Next stop was my suite for cigars
and more drinks, and then I took the people still celebrating with me out to the shoe store and bought them all two new pairs of shoes!

“On absolutely zero sleep, but with lots of wind in my sails, I embarked for the airport at 11am.”

TheDesperateHousewivesglobalsuperstar,
who has been voted the world’s most beautiful woman on several occasions, sent a limo for Phil and he was whisked away to his hotel. He tried torestupasheknewhewouldhavethe microphoneforeighthoursthefollowing
evening as they raised more than $700,000 for Eva’s Heroes charity.

It is a testimony to the nature and generosity of thePokerBrathatdespitebeingtotally
exhausted he honoured his commitment. And it didn’t stop there.

Philadmits:”Ididn’thavemuchsleeponthe Saturday night, and I was running on fumes in the middle of President Clinton’s charity poker tournamentonSundaynight,butImadeit
through another eight hours on the mic.”

After one day to catch up on some much-needed sleep, Phil and his wife Kathy, were on their way tohosttheChicagoPokerChallengeraising morethan$1.2millionfotrheTeaching

But then he is no stranger to setting goals and achieving them. And positive thinking has a big part to play in his life.

4. Buy a beautiful house – he bought a penthouse condominium on Lake Mendota in 1989, writing a cheque for the whole amount.

6. Win tons of big poker tournaments – the most celebrated player in the world with more than $21million in tournament winnings and counting!

Yet, the roots of this amazing success reach back to a childhood that was marked by disappointmen at school.

His undiagnosed Attention Deficit Disorder marked him out as the black sheep of a family of high achievers.

Phil looks back at these early formative years in his life growing up as the eldest of five children with his parents in the midwestern US state of Wisconsin, and says: “Attending high school was nonetheless the worst experience of my life! My freshman year was a disaster as far as the most important things for a high school kid went.

“I had no girlfriend, I had bad grades, and my friends were on again, off again, probably because I was so insecure and sensitive about the warts on my hands. To say that my hands were unsightly would be being kind. I learned how to write with the back of my right hand held down touching the school desk and the back of my left hand holding down the paper.

“Take a second to try it. After a few minutes, it causes your thumb to be in pain and it is hard to
write anything legibly that way. I was always hyperconscious of where my hands were during the school day – whether it was simply opening my locker, walking up and down the corridors or riding to school on my bike with my hands under my armpits. I couldn’t even consider having a girlfriend.”

It was another two years before the warts disappeared but not before the effect of this misery drove his self-esteem down a long way.

Phil first showed a natural flair for poker – along with all other boards games – during hours of
holiday time spent with the family, It was his time to shine and excel and he never looked back on the game that just a few years later was to transform him into an international superstar

His first trip to Las Vegas came at the tender age of 21, but it was the prestigious World Series of Poker which was to be his battleground cementing his legendary status and applauding his success in winning 14 Gold Bracelets – more than any other player in the history of the game.

Phil has won more than $21million in tournament prize money and continues to be one of the biggest draws on the worldwide poker circuit.

His poker spats are still the talk of the table and Poker Brat Blow-Ups have been viewed more than 60 millions times on YouTube. He had gone from the young gun breaking the old guard of the late ’80s to the Poker Brat through the first decade of the 21st century.

But while Phil still never likes to lose or bust out of a big tournament he will probably agree that he has calmed down and learned to revel in the adoration that follows him.

The father of two who lives in the beautiful Californian city of Palo Alto now enjoys the company of a close circle of highly-successful businessmen and multi-millionaire and billionaire entrepreneurs who love nothing better than trying to take his money in their weekly home games.

Phil still has his own goals and winning many more World Series of Poker gold bracelets are pretty high on his list.

But for now he says: “I look forward to a beautiful future with my cherished wife, Kathy, and with our sons Philip and Nick.”